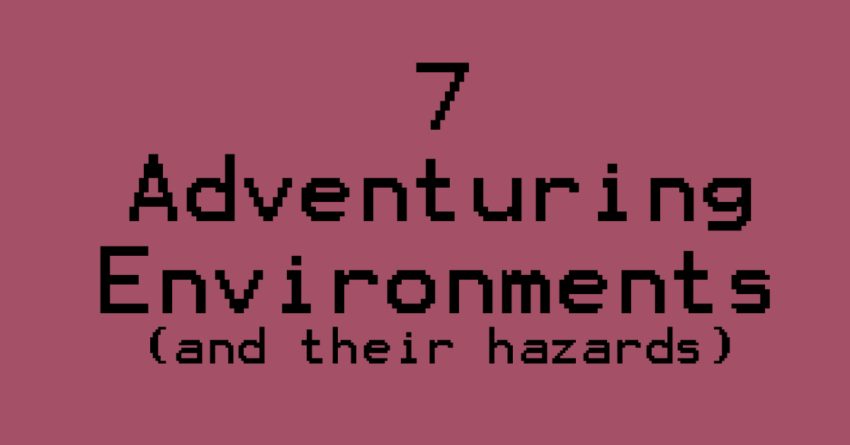 Whether the party is fighting a bunch of low level thugs or gallivanting through the known (and unknown) dimensions: as a DM you’ll need to understand the environment that they’re in. Though most encounters will take place in a unique location, they likely fall under a larger “environment” umbrella category.

For each of these adventuring environments, you’ll get a table of random encounters for level 4, 8, and 12. These encounters are designed to be of “Medium” difficulty, and can be adjusted according to your party’s needs. Additionally, each environment includes a unique hazard that you can include to throw an additional challenge at the party. Ruins are structures from societies which have been long forgotten. These might only consist of a single building or there could be an entire city of ruins from a lost civilization. Ruins are frequently partially collapsed with widespread growth of vines and moss.

Unique Hazard: Within the Coffin

Within the ruins lies a coffin that – when opened – causes rocks to fall from the ceiling for 1d6+1 turn(s). Players who begin their turn in the same room as the coffin must make a Dex Save (DC 16) or be hit by a rock, taking 2d8+2 bludgeoning damage. If a player climbs into the coffin and closes the lid, rocks immediately stop falling. In D&D, “Dungeon” is a bit of an umbrella term. It could be used to describe the actual area beneath a castle which holds prisoners. Dungeon is, however, a generally accepted term for any sort of enclosed – often underground – adventuring location. This might include caverns, catacombs, or crypts.

As the party gets within 25 feet of a closed door, an illusionary boulder drops out of the ceiling behind them and quickly rolls towards the party. The boulder itself does no damage and can be detected as an illusion under close scrutiny (Perception Check, DC14). However if the players run away from the boulder, a 10ft section of floor directly in front of the door opens up into a pit of acid. Grasslands are large open areas that are primarily covered with grass, rather than bushes or trees. Adventuring parties may come across occasional hills, flowers, or patches of very tall grass while traveling through grasslands.

The party comes across a cart that has veered off the trail and crashed by a patch of tall grass. From underneath the cart, the voice of a child calls out for help. Upon inspection the child appears to be pinned under the weight of the cart. However the “crash” has been staged and the child is in no real danger. While the party is distracted, a group of hidden bandits (the child’s family) unleashes a volley of arrows from the nearby tall grass. The defining feature of a forest is the large trees which act as a shelter for a wide variety of creatures – both friend and foe. You might come across any number of oddities in a forest: an abandoned log cabin, a den of owlbears, or even a portal into the Feywild.

As the party heads deeper into the forest the undergrowth becomes significantly more dense. If the party continues to push onward the ground is considered Difficult Terrain and 2 Assassin Vines are just a short distance ahead lying in wait. As the party crosses the vines, randomly choose two of them to attack and constrict. The arctic is an adventuring environment characterized by massive amounts of snow and very little wildlife or vegetation (if any). The party may come across enormous glaciers or smaller floating sheets of ice scattered atop frigid waters.

A large crevasse has been covered up by recent snowfall. If players are keeping an eye out while traveling (Perception DC14), they can notice a shift in the snow before it’s too late. Otherwise if the party continues the recent snow gives way and they must make a Dex Save (DC 15) to leap to safety. On a fail, the character falls 60 feet down the crevasse taking 6d6 bludgeoning damage.

Climbing out of the crevasse is difficult – especially without the proper equipment – and requires an Athletics check (DC17). Failure by 5 or more results in the character partially ascending only to fall back to the bottom, taking 3d6 bludgeoning. If a character has a climber’s kit or crampons, they may make the Athletics check with Advantage. Reaching over 100 degrees during the day and dropping below zero at night, deserts are home to some incredibly rugged and versatile creatures. If you love having sand in weird places and hate precipitation, then the desert may be the perfect destination for your next adventure!

In the distance, the party spots an oasis with a small island in the center. In the center of the island is a statue (depicting an ancient god) with a chest near the base. On the shores of the oasis lie an overturned wooden canoe and an oar, however the oar is actually a mimic in disguise. The chest can be filled with either a small amount of valuable gems or be completely empty. Navigating other planes and dimensions can be a tricky affair. After members of the party witness something inexplicable (different laws of physics / horrifying nightmare fuel / an NPC get spaghettified through a portal) consider having them perform a Wisdom save (DC 15) in order to maintain their sanity. Upon a failure the character is afflicted with Short Term Madness (see Madness for more details). Failing the save by 5 or more afflicts the character with Long Term Madness.

What are some of your favorite adventuring environments? Send me a message (aaron@thealpinedm.com) and lets chat about it! If you found this useful, please consider telling a friend 🙂 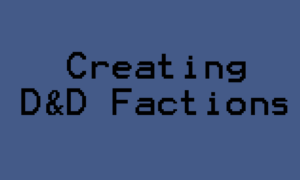 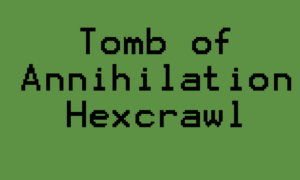 Are you currently running Tomb of Annihilation? Get some tips... 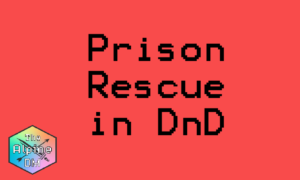