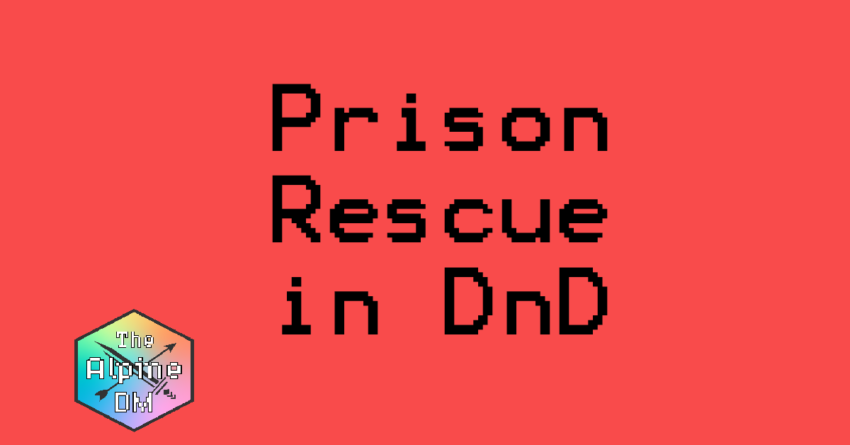 Picture this: one of the characters punched a town guard in the face and is now being held in prison. Instead of having them lawfully serve their time, the party has decided that the obvious solution is to break them out of prison. They might choose to just charge in, but many players may opt for a stealthier approach. The question then becomes how you’re going to run this as a Dungeon Master. I’ve put together a few things that I’ll be using to help keep things fast paced, exciting, and challenging.

I discovered using the Flashback mechanic through a podcast and thought it seemed like a lot of fun. Originally these are rules meant to be used for running heist jobs, think Ocean’s Eleven planning room, but I think the mechanic should apply to prison rescues nicely. After all, rescuing somebody from prison is essentially a heist. There is something valuable (in this case a person) guarded by various security measures (prison and whatnot) and the party must ‘break-in’ in order to obtain (rescue) that valuable. Flashbacks do not need to be entire 20 minute scenes, but rather just a brief description of what’s happening and a couple of ability checks or social interactions.

Full Disclaimer: I haven’t actually put these into place (yet), but I think the party is close so I want to be prepared. If I think of any tweaks after actually using it I’ll come back and update the article. For more information check out the actual rules from Blades in the Dark and u/HauntedFrog’s take on it.

The basic idea is that the party is able to spend time planning, in character, so that the players don’t have to at the table. Instead of planning every single detail and possibility, the players can come up with creative solutions as they are required. Whenever the characters come across challenging obstacles, they are able to state how their characters would have retroactively ‘prepared’ for this situation during the planning phase. The players state the end result of a flashback, and you as the DM must decide whether it is reasonable or not. This could include having specialty items prepared (explosives, spell components, forgeries, etc), or gathering intel that might be useful (location of doors, windows, guard patrols). There are a few limitations and rules I’ll be putting in place to hopefully keep things from getting too hectic.

Normally I’m all about making things up on the spot and preparing as little as possible, but I think for this scenario it’s best to actually have concrete things prepared. The more details you have “ready to go”, the easier it will be for you to convey the world to the players and respond appropriately to their choices. In order to understand how the prison is secured, you should first think about the prison’s layout and design.

The easiest way to do this is by creating a map or a blueprint! If the prison already exists in the campaign’s world, be sure to keep any existing details in mind as you plan. Additionally, if you have a map handy it opens up the possibility of the party acquiring a blueprint. In my campaign, for example, the party has a blueprint for the Western Wing of the prison and will (probably) be using it to plan a bit of their strategy. This way I can just either reveal part of the map before the rescue begins, or create a separate blue version of the map in a handout.

You have a couple different options when it comes to map making. I’ll be using DungeonDraft, which is absolutely awesome and you should definitely check it out. It’s a simple and intuitive way to make high quality maps for only $20. I’m not getting paid, I just really like it. There are plenty of other programs available or you can always just use regular pen and paper. Regardless of what you use, you’ll want to keep a few things in mind during the design phase.

It might take a while to design the prison, but be sure to do some research (ie Google “prison floor plans”) and base it off of actual prison designs. There are, apparently as I’m just learning, four common prison designs used in the US: Radial, Telephone-Pole, Courtyard, and Campus. You certainly don’t have to stick to any of these, but use them for inspiration when creating your own. Remember it doesn’t have to be – and probably won’t be – perfect. Here’s a list of things a common prison may include:

Now that you’ve got the layout of the prison figured out, it’s time to figure out how each area is kept secure. I can’t really plan this part for you, since the specifics all depend on your campaign and the prison itself, but I can prompt you with some questions to get the ideas moving along.

Hopefully these questions help you understand how the security works at your prison so the players can successfully (maybe) rescue their comrade! If you have any questions or comments, please send them to aaron@thealpinedm.com. Thanks! 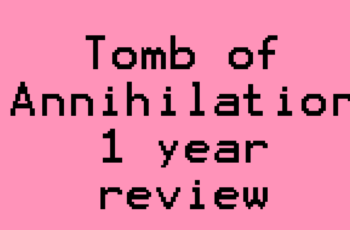 After running tomb of annihilation for a year, here's the... 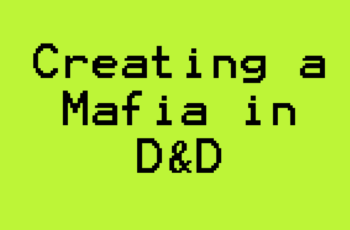 Thinking of joining the mafia in D&D? Fuggetaboudit, or you'll...

Want to store your dice in an arcane tome? Well...