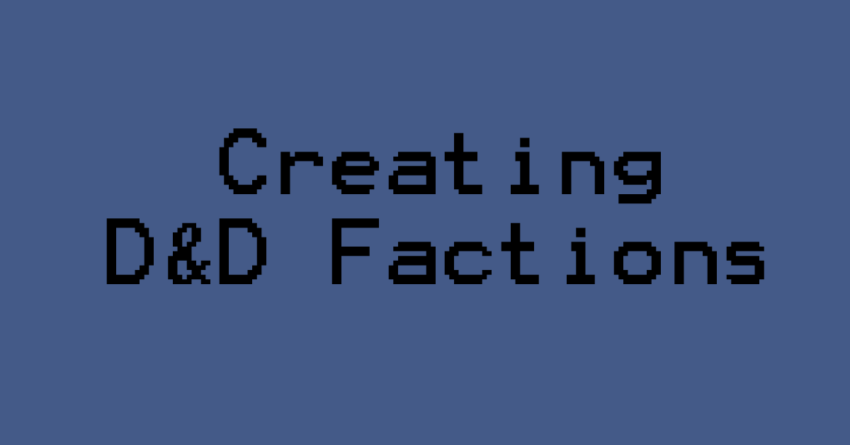 Every well constructed realm is going to have various factions that are competing for power and resources while trying to achieve their ultimate goals. Though there are a handful of D&D factions that exist in the Forgotten Realms, you may want to come up with your own factions. This could be either for a homebrew campaign or simply to change things up a bit. There are SO many aspects that can go into a well designed faction, and you may be feeling overwhelmed when trying to fully flesh out your newly founded faction.

By asking yourself (and answering!) these 20 questions, you will be well on your way to crafting D&D factions that feels realistic, concrete, and alive.

1. What is the main purpose of this faction?

Essentially, why does this faction exist in the first place? People most likely took a lot of time and energy to get this group started, so be sure to ask yourself “Why?“

2. What type of people make up this faction?

Take a moment to answer this question as specifically as possible. By doing this, you will create a better mental image for who makes up the majority of members. Your faction will feel much more alive and realistic if the members have a specific “feel” to them.

3. What is the name of the faction?

If you are completely stuck, a good general formula for naming things is an adjective followed by a noun. This may be obvious or overly simple, but its a great structure for naming anything from factions to taverns, and everything in-between. Any symbolism relating to the purpose of your D&D faction is encouraged!

4. What is the faction’s symbol / insignia?

Although not every faction has a symbol, the majority of D&D factions likely will -even if they are a secret society. These can be as simplistic as a few lines, or advanced enough to be considered works of art. They may often include animals or objects. Try looking up company logos or family crests if you’re in need of some inspiration. ​

5. What colors make up the faction’s symbol?

In reality it doesn’t really matter what the color theme of your faction is. Feel free to just go with some colors that you think look cool together. Bonus points if you can relate the main colors to the core principles of your faction.

6. What are 3 core principles of the faction?

Think back to the very first question (the main purpose of the faction), and reflect on your answer. What are some core principles that must be upheld in order to accomplish the main purpose?

7. What is the structure of leadership?

8. How are leaders chosen?

Leaders of organizations can be chosen in many different ways. Some are rather civilized, while others may result in death. The specifics of how leaders are chosen may impact the behavior of members if they have a chance at becoming a leader.

Factions with more members tend to be more powerful with a wider reach, although this is not necessarily the case. The number of members will be affected by whether the faction exists in secrecy or is actively recruiting members.

10. How long has this faction existed?

Some factions have been passed down for hundreds of generations, while others were only created a year ago. Take a moment to consider how long your faction has existed. Older factions may be more stuck in their ways, while newer factions could be more flexible and open to major change.

11. Does this faction exist in secrecy, or out in the open?

12. What is the public’s general impression of the faction (if they know about it)?

13. What is the factions relationship with the local government?

Factions are not always respected, or even recognized, by the local government. On the other hand, they may sometimes work in conjunction with the government to achieve a common goal. Take a moment to consider possible interactions between law enforcement and members of your faction.

14. How large of an area does this faction play a role in?

The reach and overall impact of a faction can vary widely. The longer D&D factions have been around, the more likely they are to impact a larger area. This could be as small as one district in a single town, up to as large as an entire region or whole continent.

15. What resources, if any, does the faction control?

Often times, a faction’s power comes from the resources that it controls. This could be something such as land and access to water. Resources may also come in the form of warriors, skilled blacksmiths, or arcane weapons. Gaining control of additional resources is a common goal for many factions.

16. Do the members live in a centralized location/base?

Large factions with a strong presence may have a prominent guildhall, while smaller and more obscure factions could have members living in separate normal houses. Even if members do not live there, consider whether there is a centralized location for the faction.

Every faction eventually is going to need new members, although how often they gain members will vary. This could be in the form of an initiation process, a formal invitation, or inadvertently being sucked into the faction. The faster a faction is trying to grow, the easier the process will be for new members to join.

18. If there is an initiation process, what does it consist of?

Many D&D factions will have some sort of initiation process in order to join. The purpose of this process is to demonstrate both your commitment to the faction and the potential value that you bring. This may come in the form of physical trials, years of study, or tests of mystical prowess.

19. Does this faction have any rivals or enemies?, or other forces that oppose their general mission?

Regardless of what values your faction holds, there will likely be other groups that completely oppose the general mission of your faction. This could come into play through direct confrontation, sabotage, or competition for resources and artifacts.

20. Is the faction associated with any deities?

Cults and religious groups are far more likely to be associated with deities, but they are not necessarily the only ones. If they are associated with a deity, do they have a specific ritual for worshiping? Does the deity assist them in their mission or grant members of the faction any favors?

What D&D factions have you created by answering these questions?

If you designed any cool factions with the help of any of these questions, tell me about them (aaron@thealpinedm.com)! If you found this useful, please share it with your nerdy friends 🙂

Don’t get caught not knowing about different monster types, learn about them here!